Where Christ Waits: A Reflection on the Sunday of Holy Myrrhbearers

Where Christ Waits: A Reflection on the Sunday of Holy Myrrhbearers 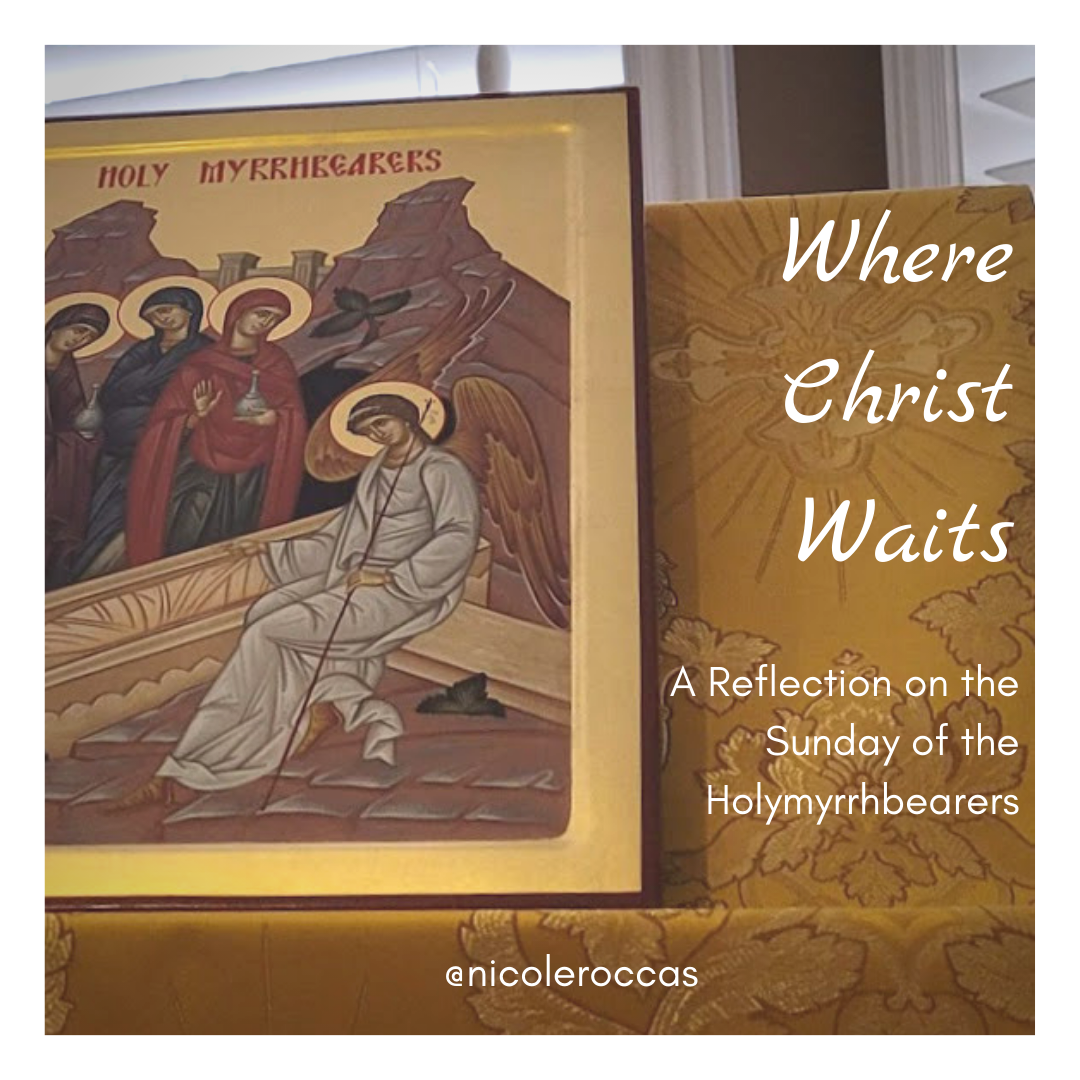 “And very early on the first day of the week they went to the tomb when the sun had risen.”

It’s hardly a coincidence that the first witnesses to Christ’s resurrection–the women1 who brought myrrh and spices to anoint Christ’s body–were those who voluntarily drew near to the work of grief.

But it wasn’t a given.

Following the rupturing experience of the Cross, these women could have avoided their grief and simply left Christ to rot–as far as they knew–in the tomb. Their hopes in the Messiah having been shattered, they could have shaken the dust of the crucifixion from their feet and gotten on with the business–and busyness–of life.

Or they could have wallowed. They could have let the loss paralyze them–not only the loss of their Saviour, but also of the months and years they had devoted to Him who in the shadow of the Cross now seemed little more than an ordinary man.

Instead, they did this simple thing, they cared for their dead. They arose the first moment they could, not waiting for the sun to awaken them, but rather “anticipating the dawn”2 of a new day, they set their face toward the tomb of Christ carrying the fragrance of perfume, of medicinal healing, of care.

Their actions were guided not by specific knowledge of the miracle they were about to witness, indeed they weren’t even certain they would have access to the *deceased* Christ given the guards and stone.

They were, instead, simply carrying on the ordinary, loving life of hope, even in the face of death, and even if the object of their hope may have been vague, deferred, fractured. They did not know why their Saviour was now dead, but they still loved Him and drew near to Him in whatever ways they could.

I believe it was no coincidence these women were the proto-witnesses to Christ’s resurrection because I believe this is where Christ dwells, on the day of Resurrection as on all days, from the beginning to the end of time. He dwells in the tension field of hope; in the place of death, emptiness, chaos. He dwells there manifesting life in its fullness.

And He waits for us to draw near to that place, just ahead of the dawning forth of our own lives,  just as He awaited the arrival of the Myrrhbearing women.

In modern Greek, the term for funeral (κηδεία) literally means “care,” specifically for the dead.

It is the antithesis of what the Fathers in more ancient times called acedia/ἀκηδεία, the spiritual sickness of despondency, of inertness, of passive apathy or “absence of care” towards the things in life one should care about. Prayer, God, one’s neighbour, one’s soul.

I do not know all the etymological steps by which “care” in a more general sense in earlier Greek specifically came to center specifically on care for the dead, but it’s a fitting shift.

For what more is there to care about in life than death? I do not simply mean the literal death of the grave, but all the shadows cast by “little-d” death–iniquity, darkness, trauma–over our lives.

To tend to these shadows, to tend to our grief, and, yes, to tend to our mortality and those we have lost in death – and to do all of this voluntarily, perpetually, hopefully, ahead of time, before the dawn, without coercion or force: to draw near to the tomb of death in this way awakens our souls from the slumber of apathy that so often consumes our days.

Even in these uncertain days, in this long night of pandemic that never seems to surrender to dawn, in the quiet, personal agonies we all hold within us as human beings, may we–following the example of the Holy Myrrhbearers–draw near to death, and so to Life, to wakefulness, to the acts of love.