“When I write–joy!” Alexander Schmemann on Writing

“When I write–joy!” Alexander Schmemann on Writing 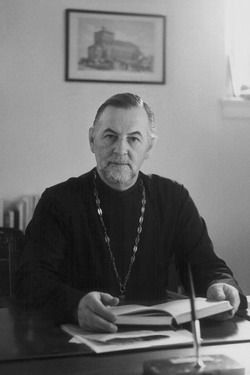 I’ve recently begun re-reading the Journals of Father Alexander Schmemann (1973-1983). Schmemann, if you haven’t heard of him before, was a highly influential scholar of liturgy and sacramental theology who died in 1983. He wrote from an Eastern Orthodox perspective, though his work is read and loved by Christians of many traditions.

His journals, I’d have to say, are among the most beautiful and captivating I’ve ever read. He wrote against the backdrop of the Cold War, was friends with Alexander Solzhenitsyn, and was an articulate observer of the global calamities of his day.

Yet Schmemann, while betraying a melancholic inclination, also had a penchant for the beauty of everyday, mundane routines and details. One minute, he laments the inflation crisis, political unrest in Tehran, or the latest developments in Soviet Russia, the next he manages to notice the clarity of the sunshine that day, or the sight of a recently bloomed flower. His journal is a constant reminder of the goodness that surrounds us, even in uncertain times.

This time around, I’m also noticing the many comments Schmemann makes about writing–the process, the craft, the agony, the mystery. He was something of a prolific writer, yet not in the publish-or-perish way of the academic milieu that surrounded him. Indeed, Schmemann found much of academia disillusioning at best. He sought, instead, to write for a larger population, in service of the Church at large, and anyone who might get swept up in its path. And he sought to do this with the same eye for beauty and goodness that typify his journal writings.

His comments on writing sprinkled throughout his journals testify to the ambivalence such writing required–an ability to have one foot in the academic world his job required him to operate in as dean of St. Vladimir’s Seminary, another foot in the sacramental writing he seems to have sensed he was called to. To be “in the world, but not of the world” of academic writing, in a sense.

Here are five examples for those who are familiar with Schmemann, or anyone else who needs a dose of writerly camaraderie on this late-summer, already-autumnal Monday morning…

All these days I am in a creative mood. I am writing … a paragraph that has been blocking my writing for over a year. As usual, the solution, the unblocking, does not come out of me, but is somehow suddenly opened up to me. It is always a wonderfully happy feeling.

Schmemann, Jan 14, 1974, on writing what would become his book Of Water and Spirit.

When reading about writers, about the academic milieu, I came to the rather pleasant conclusion that I never suffered any form of careerism: I never sent any books with my inscriptions, nor sought book reviews. I avoided meeting influential people who could help promote my “career.” I never imposed on anyone my books, articles, or convictions.I am neither proud of this, nor am I attempting to show off my humility. No! I think that my main reason for this is to avoid being tied down, and a secret constant thirst for freedom.

While I write–joy! Then–doubts. In all my writings, I never had as many doubts, as much difficulty: sixteen pages since summer!

Schmemann, Feb 21, 1979, on the difficulties of writing what would become his famous The Eucharist: Sacrament Of the Kingdom

A few quiet hours yesterday, and a gradual plunge into the “Sacrament of Remembrance.” As usual, only when really starting to write do I realize what I want or rather, what I need to write. Whether I will succeed is another matter.

Schmemann, September 18, 1979, referring to what would become Chapter 10 of The Eucharist

Lecturing always gives me joy. … Why can I speak rather easily and while speaking give birth to thought, yet find it so difficult to write?

On some days I am attacked–not violently, but quietly and depressingly–by a lack of faith in myself, in what I am doing, writing, serving. On these days, everything I have written seems unnecessary, and all my work seems like a soap bubble.

I am in bed with a nasty cold, reading a few strange books without any feeling of satisfaction. Maybe my discouragement comes from that! To thse authors, everything seemed alive, important, decisive. And then it becomes the property of academic worms