“Wait without Thought”: Writing and Not Writing during COVID-19

“Wait without Thought”: Writing and Not Writing during COVID-19 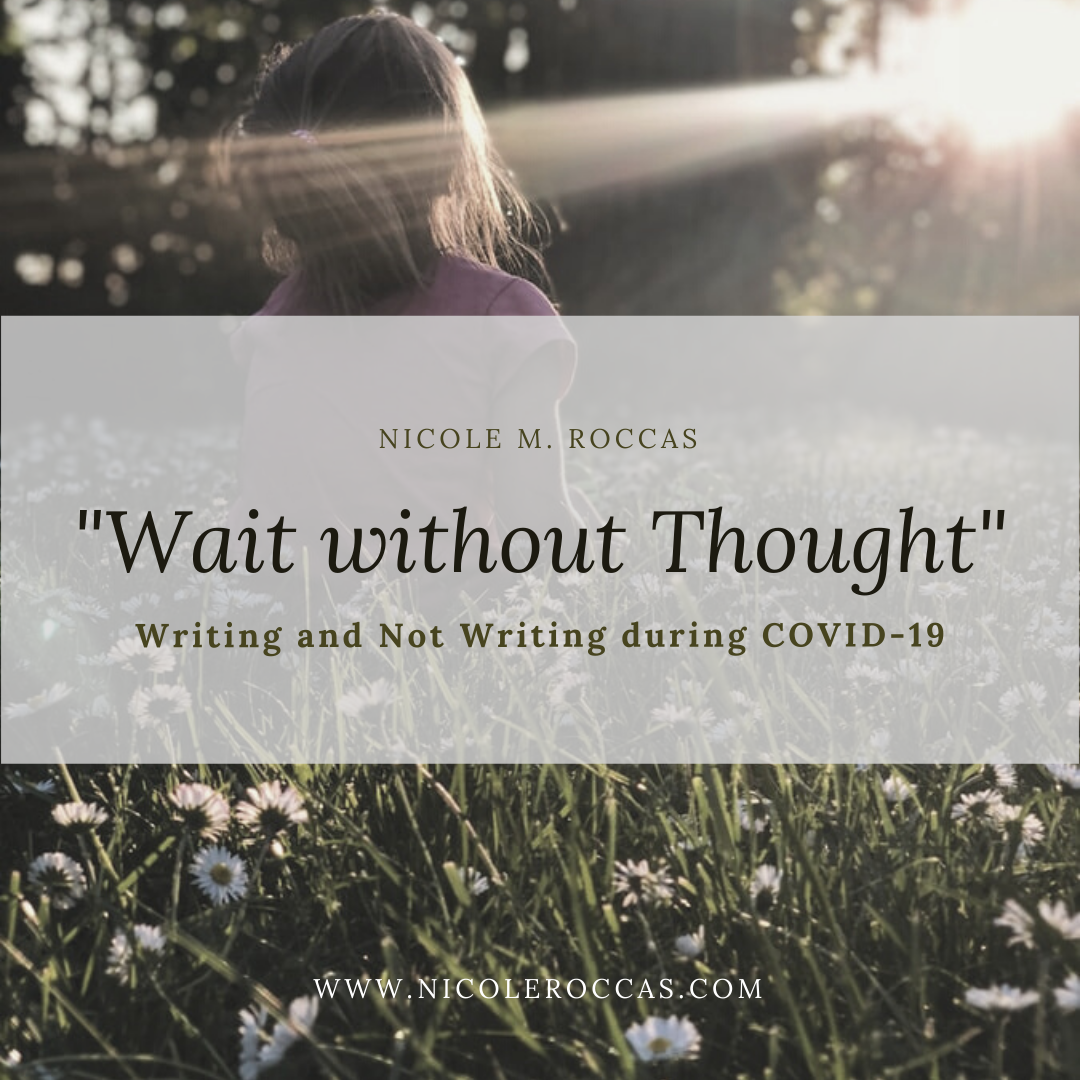 Last week, I had a pitch rejected by a literary magazine I have always wanted to write for.

At least “rejection” is what I’m calling it. In reality I just didn’t get a response.

I’d queried the editor with a piece that looked to Benedictine spirituality as a way to find meaning amid shelter-at-home existence. It was good writing, she said, but they are seeking pieces that look toward the future, envisioning what life will be like after the initial crisis phase of COVID-19.

Could I write something about that instead? She asked.

My first, bumbling thought: what is that strange word she keeps using, “future”?

Was it a country I’d never heard of (like Nauru or Brunei–who knew those were places?), a new dimension physicists had only recently discovered, some weird planet that suddenly appeared in our solar system… ?

That’s how strange it felt to consider any realm of time other than the all-consuming novelty of the COVID-19 present moment.

My second thought was: buck up, Nicole, you’re a writer. It’s your job to find words when others can’t. Doctors and nurses and grocery store employees are out there saving the world simply by showing up and doing their jobs. Is it really so hard to bring hope to others by finding something meaningful to say about the future? Dostoevsky said that beauty will save the world, don’t blow it by being silent. Also, no pressure.

So I found some words and randomly flung them at the blank canvas of a new email thread with this editor, hoping she’d be able to detect a vaguely recognizable shape in it all.

Shocker: she never wrote back.

I’m guessing because the email was less a pitch and more an amorphous glob of puzzled thoughts interspresed with insecure apologies for how disorganized it all was.

I felt embarrassed almost as soon as I sent it. Not only that I’d shared something so stream-of-conscious with a real-life editor, but that I was unable to come up with something better. More ordered. More poignant. More marketable.

In essence, that I was unable to save the world through my words.

After all, Brené Brown has managed to pivot her work to these new, dire times. So has Gretchen Rubin. So have a lot of other writers and podcasters and journalists and communicators. They have managed to say not just something, but meaningful, helpful, well-articulated somethings. Things we all need to hear. Things that will change us for the better.

It’s not (just) that I’m jealous of their ability to shift with seemingly little effort or forethought.

It’s more that my inability here touches a nerve of something I’ve always felt ashamed about: my slowness.

When I was little, I was anemic and slow and clumsy on the playground. I never got picked first for kickball teams, or at all. I finally gave up on physical games in third or fourth grade, and instead spent my recess time reading or self-isolating in the shadows under a tree. I wasn’t the first kid to raise their hand with the answer in math class. My hand-me-down clothes were always very obviously a few years (or generations?) behind the fads. I often had to ask for jokes to be explained to me multiple times. No matter how hard I tried to be fast and quick and witty, I was usually slow, late, and vaguely overwhelmed.

As an adult (and an avid caffeine consumer), I have found ways to speed it up when necessary. But in writing, where I am in many ways my truest self, the old rules still apply: I’m just not a trendsetter. I’m rarely the one who can speak up first on something, or even second.

I am, instead, a watcher and waiter, something of a hyperobservant toddler who fails and fails to speak, whose cognitive abilities lag behind her peers for months and years, until one day she starts speaking in complete sentences and four-syllable words.

This is who I am in the best times. In the worst of times, my usual “time lag” is even more apparent. Unfortunately, so is the internal sense of shame and pressure to write something. And write it quickly. And write it meaningfully.

I doubt I’m the only writer who feels this pressure. As communicators we carry within us a heightened affection for the act of describing and articulating and ordering the chaos of the ineffable.

We forget that beauty does not always consist of new creation, it sometimes consists of quietly bearing witness to creation. At other times it consists of the formless void that came before creation, of reocognizing our own inability to create in and of ourselves.

There is a humility in “waiting without thought,” as TS Eliot has put it. It gives us time to calibrate, to connect with our vulnerability, to be human, to be.

As much as editors and the world at large need visionaries–souls who can manage to see even from our current vantage point seeds of new possibilities after COVID-19–I know we will also need “slow” writers like me, people who are ready to pick up the baton later, who are gracious to run the race in the middle or back of the pack, who can pick up the broken pieces and strewn gatorade cups left behind from the trail blazers. We will need people who can look not just forwards but backwards, who can remember and integrate the past with whatever brave world will come after this one.

We need writers who have the faith to not speak yet, to wait even as the emptiness builds within themselves, to honor the silence when words do not immediately come. Writers who have the courage to admit that they are not yet ready for thought, in the simple faith that someday they will be filled, with resurrected words as with resurrected life. Someday the darkness shall be light, our stillness will turn to dancing, our formlessness will turn to new creation.

Wishing all those who celebrate Good Friday today a blessed recollection of Christ’s suffering and anticipation of the resurrection.