This is Me Speaking Out: Susan Cushman on #CreativeUncertainty

This is Me Speaking Out: Susan Cushman on #CreativeUncertainty 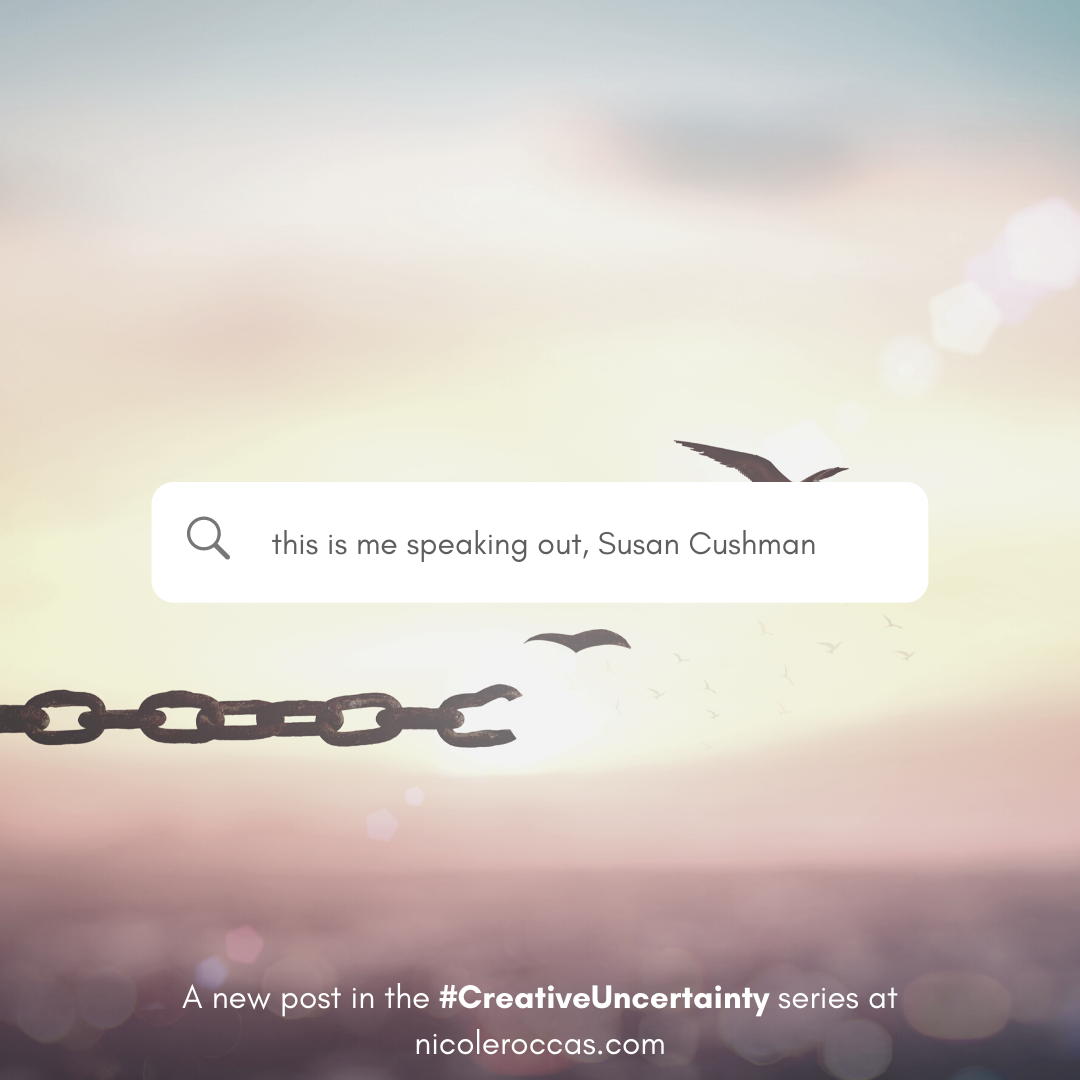 We can’t save lives (medically speaking), we don’t put out burning buildings, we usually aren’t very rich or powerful. So what role do writers play in an era of change and uncertainty? This is the first question my friend and fellow author Susan Cushman tackles in this week’s installment of Creative Uncertainty, a series of guest posts on this blog featuring creatives opening up about how uncertainty has shapes their lives and process. I’ve never met Susan in person, but after I gave a series of talks in her hometown that she was unable to attend, we’ve become internet friends and I’m grateful to have her here! Without further ado…

“This is Me Speaking Out“

When I read the theme for these guest posts, I immediately thought of a chapter in Dr. Al Rossi’s book Becoming a Healing Presence titled, “Embracing Ambiguity”: “The sign of mental health is the ability to handle ambiguity.” For all the stories we hear about successful artists, musicians, and writers who live on the edge of sanity, I believe that good mental health is crucial for most creatives. It’s especially important during times of uncertainty.

Nicole: We are not front line workers, scientists, or “essential” businesses. So what role do creatives play in the midst of social change and uncertainty?

The first people that a dictator puts in jail are the writers and the teachers because these are the people who have vocabulary, who can see injustice and can express what they feel about it. Artists are dangerous people because they are called to work with human clay, with the heart and the soul. . . . When Hugh and I went on a trip to Russia I almost didn’t get a visa because our travel agent put down my occupation as writer. Writers think. Writers ask questions. Writers are dangerous.

Writers are dangerous. Words are powerful. Our calling as writers is to use our words wisely, whether to entertain, inspire, or educate. Speaking out against injustice—through the artist’s illustrations (whether fine art or graffiti), through the musician’s lyrics, and through the writer’s essays, articles, poetry, short stories, and books—is part of that calling. Telling the truth with our creativity is important for us personally, and for the world. As L’Engle said, “We all feed the lake.” (Walking on Water: Reflections on Faith and Art)

I’ve been considering what my part is in feeding the lake since I first read L’Engle over a decade ago. Each time I write an essay, a short story, or a book, I consider the impact I am choosing to make with my words. Never has that choice felt more important than right now, in the midst of significant racial unrest and potential for change in America.

Nicole: Tell us about a quotation or Bible verse that has been particularly meaningful for you as of late.

Susan: I’m from Mississippi, and one of our famous authors, Eudora Welty, wrote, in her book On Writing, “Every writer, like everybody else, thinks he’s living through the crisis of the ages. To write honestly and with all our powers is the least we can do, and the most.” For the first couple of months of the pandemic, I felt that I was indeed living through the crisis of the ages. And maybe I was. Maybe we still are. But once I realized that isolation isn’t a detriment to a writer, I took advantage of my voluntary self-quarantine and wrote a novel.  I felt that Welty was calling on me to “write honestly and with all my powers.”

Nicole: What book(s) have nourished your creative soul most recently? What made them helpful? Who would you recommend them to?

Susan: John and Mary Margaret—the novel I wrote during the pandemic—will be published in June of 2021. It’s a rare insider’s look into the white privilege bubble of a young girl growing up in Jackson, Mississippi and participating in sorority life on the Ole Miss campus in the late 1960s. But it’s also a candid portrayal of a young Black boy from Memphis who follows his dream to study law at the predominately white university. I set their unlikely love story squarely in the center of decades of historical events—especially within the civil rights movement—in Mississippi and Memphis from the 1950s through 2020.

I read numerous books and articles as research and inspiration for this novel, but the most significant was Pulitzer Prize-winning author Isabel Wilkerson’s profound book, Caste (Random House, 2020). Reading it was a major move forward for me in what I call my  “awakening.” I hope and pray that its message will inspire and encourage others to make brave choices, as Albert Einstein did when he escaped the Nazis in Germany and arrived in America in 1932, only to discover that our caste system was just as bad, if not worse. As Wilkerson writes in Caste, Einstein felt that he could “escape the feelings of complicity in it only by speaking out.” I offer John and Mary Margaret as my small but earnest beginning to resist complicity. This is me speaking out.

Another book that nourished my creative soul recently was Mississippi author Minrose Gwin’s debut novel The Queen of Palmyra (HarperCollins/Harper Perennial, 2010.) When it came out, author Lee Smith wrote, “It’s the most powerful and also the most lyrical novel about race, racism, and denial in the American South since To Kill A Mockingbird.” I read it because it is fiction, set in 1963 Mississippi, and it addresses important issues with beautiful literary prose. I would recommend both of these books to everyone who wants to increase their understanding of issues of race in America.

Nicole: What life experiences most shape your creative work?

Susan: I experienced sexual and emotional abuse as a child, and I was part of a cult-like religious group for many years as a young adult. Both of those experiences shaped my early work, especially my first novel Cherry Bomb. That book was also shot through with scenes and images inspired by my abuse, and by my experiences as a convert to Orthodox Christianity, especially studying the art of iconography at monasteries.

My immediate family has shaped—and continues to shape—my current work. In the 1980s my husband and I adopted two children from South Korea. And while they both experienced a degree of discrimination growing up in Jackson, Mississippi and Memphis, it wasn’t until our Korean daughter married an African American man in 2011 and blessed us with two beautiful mixed-race granddaughters in 2012 and 2015 that I began to consider how their lives might be affected by social injustice. Our daughter and her husband—a Memphis native—are choosing to raise their family in Colorado rather than in the South where they grew up.

I get that. I have empathy for them, and for the potential hardships my granddaughters may face. But I learned from reading Caste that “Radical empathy means putting in the work to educate oneself and to listen with a humble heart to understand another’s experience from their perspective, not as we imagine we would feel.”

My #OneWord365 for 2021 is HOPE. I chose this word after you (Nicole) spoke about hope at a (virtual) retreat for our women’s group recently. I am filled with hope for the future, not only for the end of the pandemic, but even more so for radical repentance, change, and healing for the decades of racial injustice we have allowed. I HOPE that I can be a healing presence in my sphere of the world—especially through writing—and bring HOPE to others.

Susan Cushman is a Mississippi native living in Memphis, a convert to Orthodoxy, and the author of six published books, with a seventh book coming in June. Follow her on Facebook, Instagram, and Twitter, and read about her work on her website.