The future of hope in a brave, new-normal world

The future of hope in a brave, new-normal world 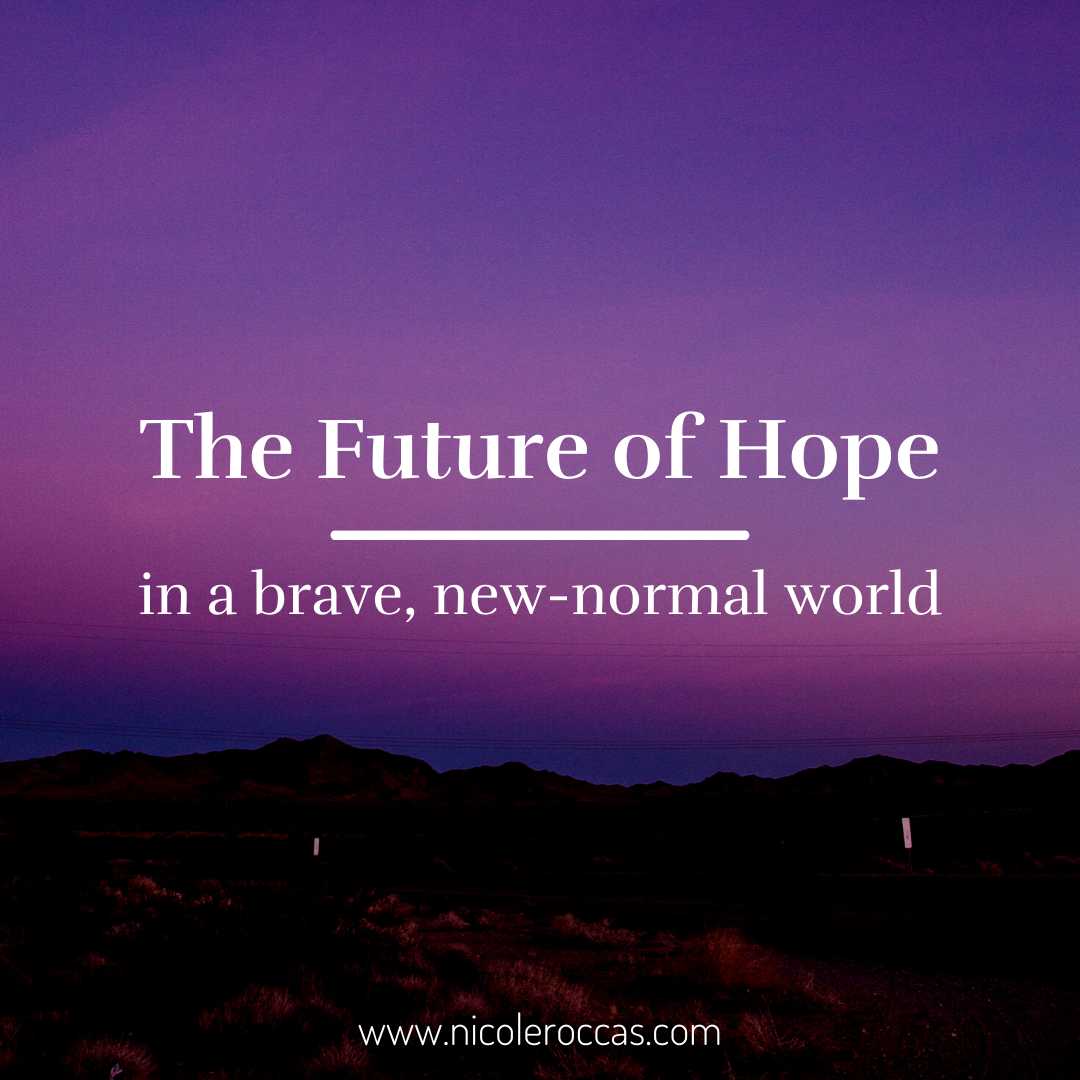 The future of the workplace.

The future of democracy.

The future of news.

The future of the economy.

The future of truth.

The headlines that swirl around me toll the ominous futures of an ever-widening quantity of institutions, social norms, and moral principles.

Truth be told, I am less concerned about these dimensions of the future, hallowed though they may be, than I am about another. One that is smaller, quieter, and yet–somehow–infinitely more crucial than even democracy or law and order or vaccines:

The future of hope.

I think I could bear any version of the future, no matter how dark or strange, so long as it also contains hope.

But right now that seems like a long shot. 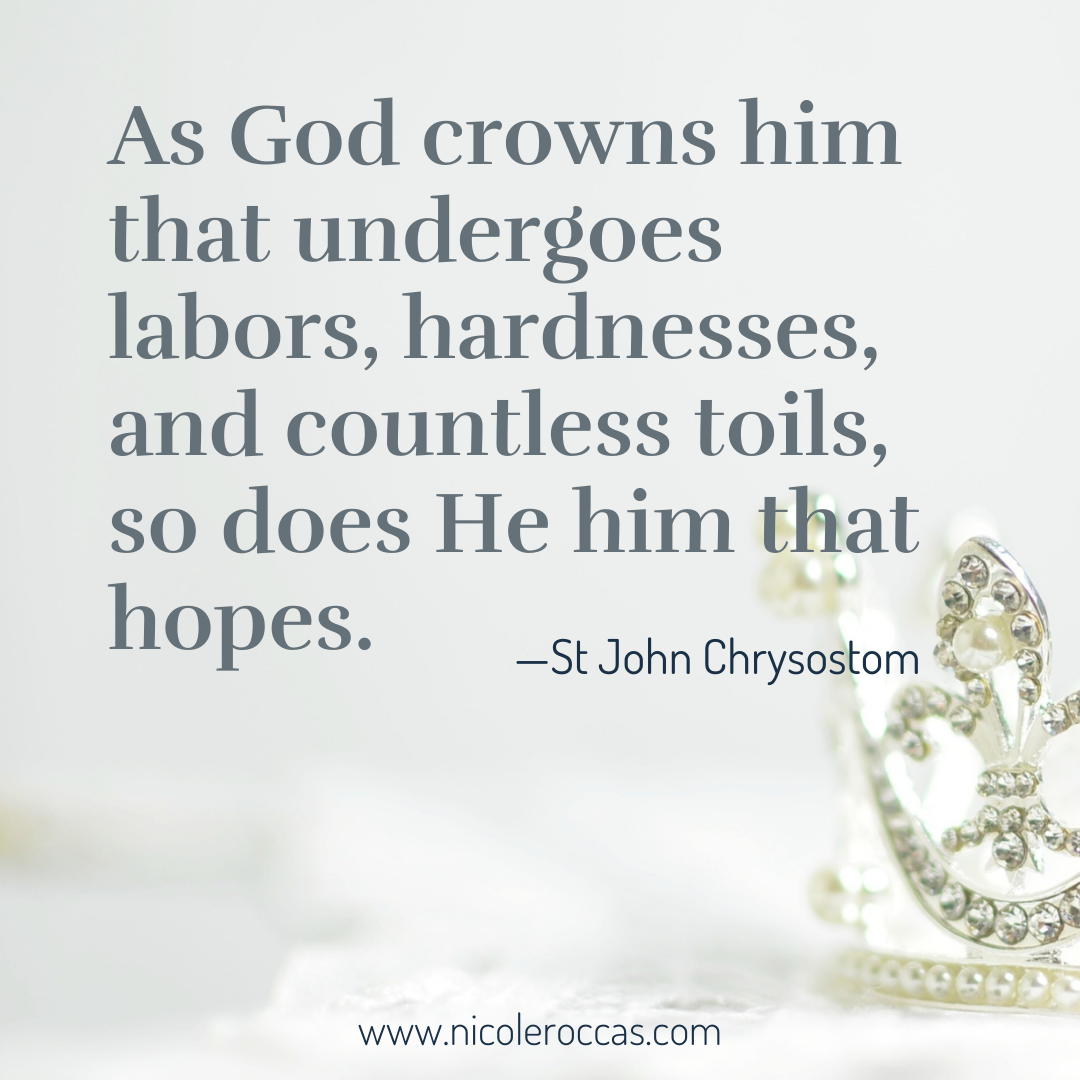 What form could hope possibly take in this new-normal world whose path forward has blurred beyond recognition? Will there be reason for hope in the future? Is there one now?

In his typically sanguine style, St. John Chrysostom once defined hope as “feeling confident in things to come” (Homily 14 on Romans).

Hope was hard enough in the good old days of seven months ago when there were at least a few things that felt certain. The long-term durability of toilet paper supply chains comes to mind.

I was hardly ignorant of life’s uncertainty before the pandemic, yet somehow the future had a recognizable shape, even if the particulars of my best-laid plans never quite matched it.

Now, though, it’s almost as though the future as we knew it has retreated.

This post began with a question: what is the future of hope in a world that has lost its sense of future?

But the more I ponder this line of inquiry, I begin to wonder whether I haven’t gotten it backwards.

Rather than asking if the future warrants hope, maybe I should ask what kind of future would hope impart to me–to us?

How does the simple act of clinging to hope change not only our attitude toward the days to come, but the very substance of them?

In the course of my life, I’ve so often withheld hope until it seemed a vaguely rational choice: until the sociopolitical climate showed signs of improvement, until my personal future seemed bright, until I had something to be excited about.

Hope was my nod of approval to reasonable evidence that the future I deemed myself entitled to would, indeed, come to pass.

In other words, I began with the future–what I could perceive of it in the present. Hope only entered in if I liked what I saw. 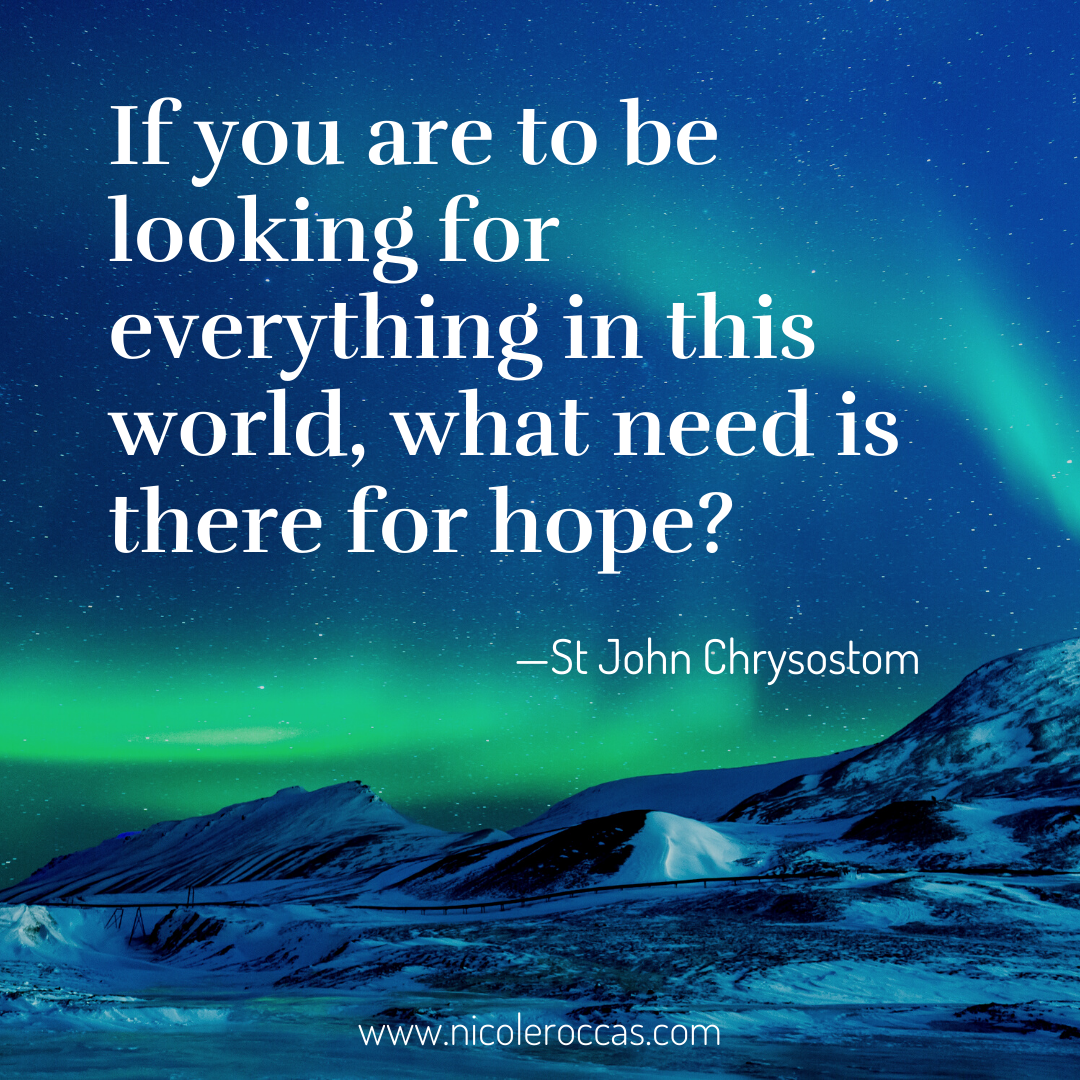 To use Pauline language, I have spent most of my life hoping in what is seen–on the visible justification of hope.

Which, as he points out, is not hope at all.

In this “rosary of suffering”1 that is 2020, I am learning this truth. I am learning to begin with hope itself–with the perilous, mysterious unseen–and let the future sprout from that seed. 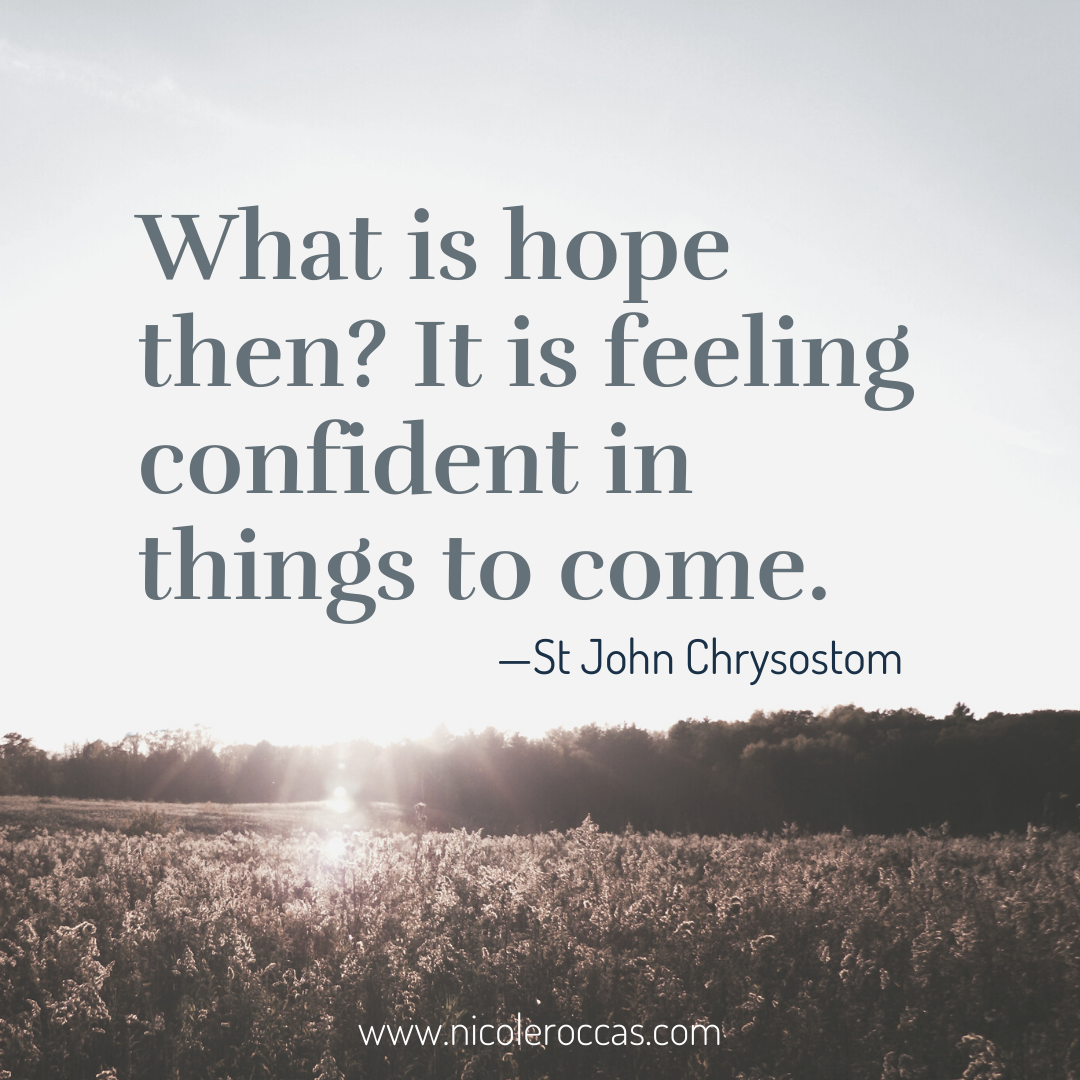 It’s a process, this learning, this unfolding of myself and my expectations into the paths of hope. Seven months in and, still, I barely know what hope is, but I am relieved at least to have discovered it is not the same thing as optimism.

Optimism can be a sort of white-knuckle insistence that things will work out. They *must* work out. The world is too scary to think about otherwise. Though not a bad character trait, when taken to an extreme optimism can turn into a kind of blind insistence, a willful ignorance in the face of suffering and reality.

Hope, on the other hand, sees the bad, the broken, the shadowed streets of our shame. It sees the pain of our infirmity but it also perceives the potential for sacredness.

Whether the glass is half full or half empty is less of a dilemma for hope, because it can envisage in the glass itself and the water within as reminders of God’s presence in the midst of our reality–the past, present, and future of it. And that, alone, is reason to hope.

Hope is less insistent that particular situations “work out” so that it can be vindicated in the end.

It invites us, instead, into a general posture of humble confidence towards that realm of time that is yet unseen, i.e. the future, both in its earthly and eternal modes. It does not ask us to know the particularities of the future, whether our job will be secure or our adult child will return or all we long for in this life will be granted or resolved.

It is, instead, the simple, quiet living out of those final, mysterious words of the Creed: “I look for the resurrection of the dead and the life of the age to come.”

We must look for these things, not just on the distant horizon of some theoretical future, but all around us. And not as though we are looking for something that is lost and may never be found, but looking as though we were once blind but now we see what is and has been all around us this whole time.

If we cease to do this looking for the resurrection, we will “lapse into a kind of collusion with entrophy,” as NT Wright put it in his marvelous Surprised by Hope, “acquiescing in the general belief that things may be getting worse but that there’s nothing much we can do about them. And we are wrong.”

Our task in the present … is to live as resurrection people in between Easter and the final day, with our Christian life, corporate and individual, in both worship and mission, as a sign of the first and a foretaste of the second.

Maybe this year is a crucial (an alternative definition of the word being “cross-shaped”) reminder that hope, as an active choice borne of faith, is not an optional add-on–not for the Christian, perhaps not even for any human. We can live without a great many things, but I do not think many of us can live very long without hope, at least not in any real sense.

And I think this year, by pulling back the veil of prosperity to reveal our feebleness, has clarified the urgency of this choice. These are dull, despairing days, and the days may yet get worse.

The future, however unclear it seems now, will come. It can be a future sown in hope or in cynicism, in confidence or in skepticism, in entitlement or in gratitude. 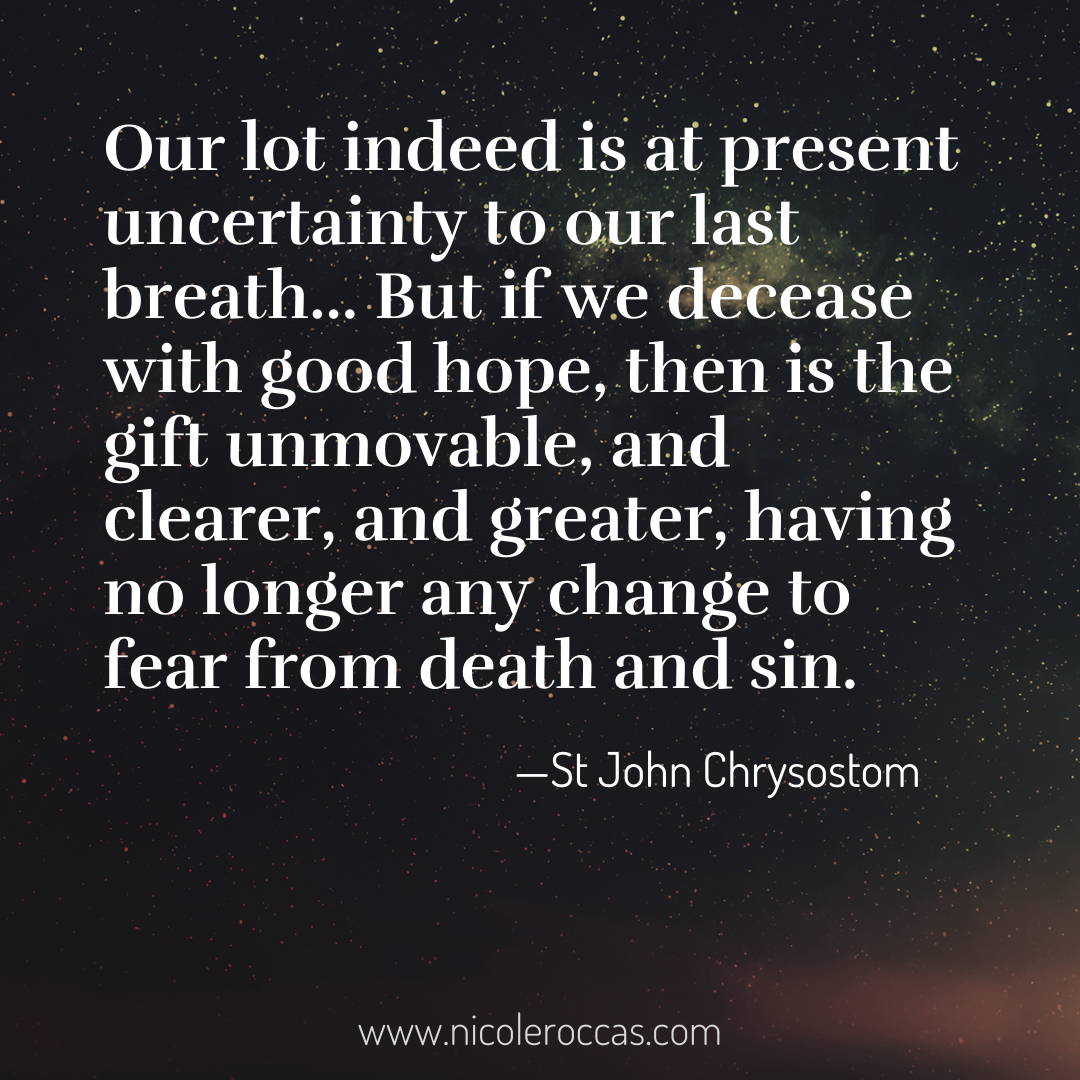 It has never been an easy thing, beginning to hope, particularly in an age when cynicism masquerades as knowledge, skepticism as intelligence, and despair as prudence.

But I’m beginning anyway, or trying to. And then trying again.

Care to join me?